After my "migration" to different lands, I couldn't fail to notice that Romania is not the only country where firecrackers can be heard intensively for the whole freakin' month of December. Children and children_not_anymore light large quantities of firecrackers on the streets, like some sort of way making themselves noticed, I guess?

I knew there is some sort of tradition in China, something about keeping evil spirits at bay, but my knowledge ended there.

So, short Google search and here we are, official Chinese website gives me the full story:
http://www.ebeijing.gov.cn/feature_2/Traditional_Fesitival/Spring_Festival/Legend_SP/t1020695.htm

It seems that there is a legend, of Nian[1], a monster with a horn on his head, who used to live at the bottom of the sea. The beast, called Year, used to come out one day per year (you can guess what day that is) to devour cattle and people (preferably children).

In the legend, the day is saved by a beggar, who protects a village using lamps made of red paper and ancient firecrackers.

As a side note, not much related to my subject of choice here, in The Netherlands there is a custom of eating some sort of donuts, ollieballen and all kind of fatty products. Of blame for this (other than modern consumerism) is a pre-Christian Germanic goddess Perchta (Bertha), who liked to cut people's stomachs during the dark days of winter. Fat = slippery, so she might miss, if you would consume the above mentioned type of foods.[2]

Today, not in China # 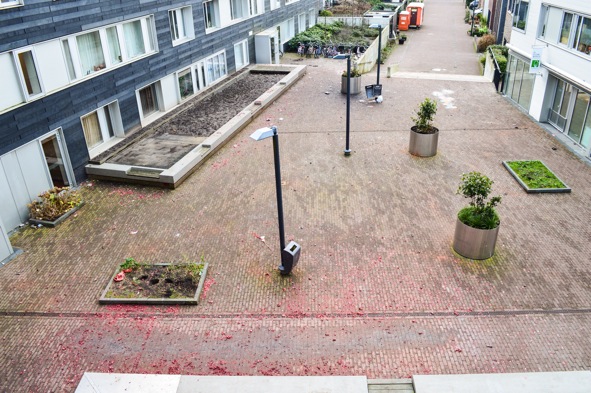 click for the larger versionAlthough I'm not a supporter of superstitions and things like this, I can understand lighting fireworks and and light firecrackers at midnight on 31st of December[3], but not like this. In our neighborhood, firecrackers started to be heard since the end of November, quite extensively.

Now, you cannot blame the children for doing this, of course, I keep wondering, is this how the modern society works like? Instead of looking out for your children, you send them out to play in the street and more than that you give them money to buy explosive devices to blow everyone's brains out? I suspect that this happens only in winter because that's when these products are popular and can be found in semi-legal stores. The rest of the year, other activities are preferred.

Is this what parenting has become in The Netherlands? There's a great deal of ignorance involved here, from me, from the other neighbors, from parents. You know that your kid is out there, making all that racket and disturbing everyone and yet you don't do anything. Why is that?

Some will be tempted to say that it's those Moroccans, Turkish, Polish, insert_minority_here kids that do this, but by the looks of it, it seems to be a generalized practice.

Writing this on a background of faint explosive sounds, glad that their season is almost over